We are a big fan of winter. Snow-covered landscapes, cozy weekend getaways, private jet skiing trips, what's not to love?

However, when it comes to aviation and airports, winter and snow can be a source of frustration to airports, crew ánd passengers. While it may look pretty to have snowy planes on the tarmac, what's underneath that snow is not actually something pilots want to see.

In this article, we will look at the effects of snow on aircraft, what aircraft de-icing is, how it works, and why you should keep it in mind when traveling during the winter. 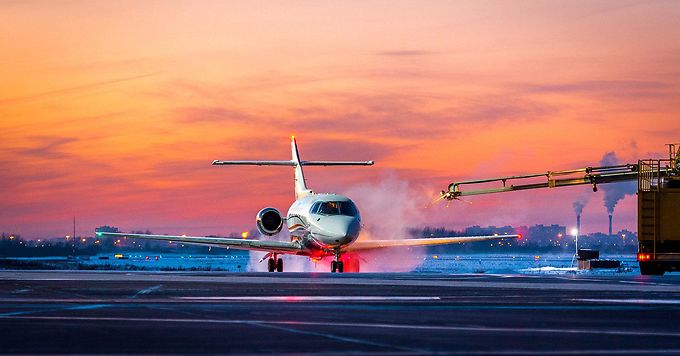 Snow and ice on an airplane can create a number of dangerous problems. The frozen contaminants can interfere with the aerodynamic properties of the airplane, causing it to lose lift and increase drag. This can be very dangerous during takeoff and landing, when the plane is already flying at a low speed. In addition, dislodged ice can damage the engines or other important parts of the airplane.

This is why it is important to de-ice airplanes during winter, as it can help make sure the aircraft can take off safely, as well as prevent any potential damage caused by ice from occurring.

The International Civil Aviation Organization (ICAO) estimates that ice on the wings can reduce lift by as much as 30% and increase drag by up to a whopping 40%, which would result in a significantly negative impact during the takeoff roll.

As mentioned above, contamination of aircraft wing or fuselage surfaces can have a dangerous impact on the aircraft's aerodynamic properties and thus pose a significant risk during take-off and flight when not treated.

Aircraft de-icing is a process that is used to remove snow, ice or frost from the wings and fuselage of an aircraft. It is an important safety procedure that must be carried out before every flight during the winter months when icing, snow or slush are visible on aircraft surfaces, or when the risk of it building up is high.

De-icing refers to the removal of snow or ice from a surface that has already built up. As such, de-icing procedures must be carried out before an aircraft takes off and before every flight during the winter months. Using very specific heated fluids (which we will discuss in more detail below), already built-up snow and ice are 'blasted off' the aircraft surfaces.

Anti-icing, on the other hand, deals with procedures that are carried out on surfaces in order to prevent the formation of frost, ice or snow.; it's a more proactive approach to prevent future contamination.

As mentioned above, aircraft de-icing is done by spraying specific fluids onto the aircraft surfaces, usually with one or more de-icing trucks.

The type of fluids to be used depends on whether it's for de-icing or anti-icing.

For de-icing (removing existing contamination) a fluid called propylene glycol is used. This orange-colored fluid is heated to around 60-65 degrees Celcius and sprayed over the aircraft under pressure, blasting off any existing snow, ice or slush. 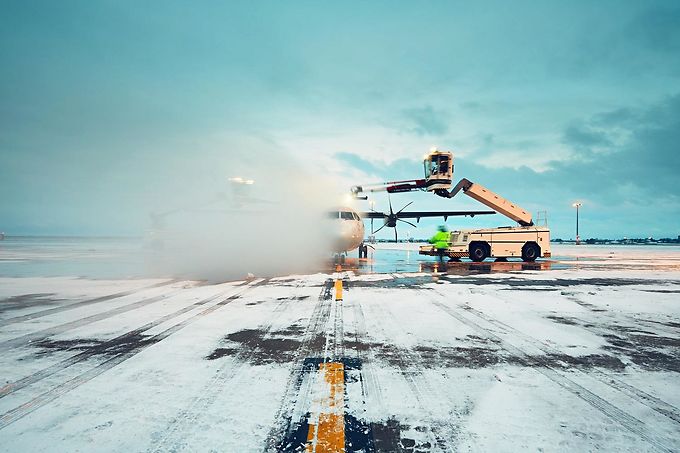 Depending on the conditions (temperature, contamination level, aircraft type, and others), propylene glycol is mixed with a certain percentage of water. Using the right percentage is important for effective de-icing, as too much water can create ice instead of melting it. These days, modern de-icing trucks can automatically adjust the ratio according to the current outside temperature and weather conditions.

This combination of propylene glycol and water is called Type I de-icing fluid.

For anti-icing, another fluid is used, so-called Type IV fluids. This fluid has a green color and is not heated like the de-icing Type I fluid. Instead of using water, thickening agents are added to it to increase the viscosity of the fluid, making it better stick to the aircraft's surfaces. This way, it will less easily detach from the aircraft when taxiing or during the take-off roll.

Besides Type I and Type IV fluids, a number of other de-icing/anti-icing fluids exist. Type II and Type IV are very similar regarding their viscosity and how they work, so both are often used for large aircraft.

Type III anti-icing fluids were developed for smaller aircraft particularly, as they are formulated to shear off at lower airspeeds. Where Type II and IV will release from the aircraft's surfaces around 100 knots in general, Type III can detach from the aircraft at lower airspeeds of around 60 knots. This makes them more suitable for smaller aircraft such as regional/private jets and propeller planes.

Aircraft de-icing can be done at any airport where winter operations are in place. During the winter months, it is standard procedure at most airports to de-ice certain aircraft before every flight or when required by conditions.

Depending on the airport's infrastructure, aircraft can be de-iced either at their gate or stand, after pushback, or at designated de-icing pads. The latter is usually only done at larger airports, as smaller airports often do not have any fixed locations for de-icing procedures.

De-icing is done just before the aircraft is departing. Because built-up ice, snow and other contamination have such a large impact on aircraft aerodynamics such as lift, the most critical part of the aircraft's flight performance is during take-off.

For this reason, de-icing is done just before the aircraft will depart, so it has sufficient time to melt/blow off any built-up ice before it becomes an issue. When reaching rotation speed (around 100 knots for most private aircraft), most of the anti-icing fluids will have blown off the aircraft, with the remaining fluids all disappearing by the time the aircraft reaches 700 to 1,000 feet above the ground. 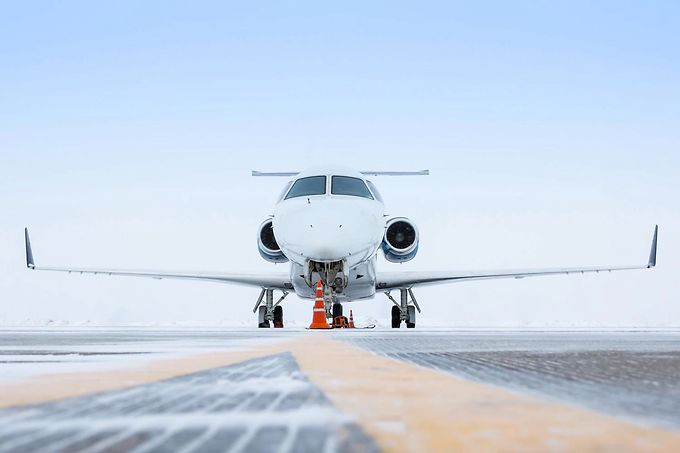 This brings us to another interesting question, how long does the pilot have between de-icing and taking off?

For this, there is a term called 'Holdover Time', which is defined as the time between the application of de-icing fluids and the aircraft's take-off. In other words, once the aircraft has been de-iced, it should not require another round of de-icing within the holdover time. The exact holdover time depends on the specific type and brand of fluids, and governing aviation authorities (US vs EU and other parts of the world).

For this, a distinction has again been made between de-icing and anti-icing fluids.

In general, the holdover time for de-icing fluid will usually be around 20 minutes. Anti-icing liquids have a longer holdover time, which can be anywhere from 10 minutes to over 2 hours, depending on weather conditions (snow and very cold vs slightly negative temperatures and no precipitation).

It's not completely impossible that at larger airports, airport traffic can build up during rush hour and aircraft need to wait so long that they have passed the just-mentioned 'holdover time'. When this happens, the pilot is legally required to request a second de-icing for his aircraft. Luckily, this is usually the exception rather than the rule.

The exact holdover time at an airport in specific weather conditions can be calculated in a few different ways. It used to be done by visual reference in the control tower: depending on visibility, the level of snowfall could be estimated, and thus calculated how long it would take for snow and ice to build up on aircraft waiting for take-off.

Nowadays, more modern solutions are used, such as 'snow sensors' around the airport, digitally measuring the amount of snow/precipitation. Crews also use apps and data to calculate accurately how long they have to make a safe takeoff. These apps also take into account the type of aircraft: composite aircraft are less subject to built-up ice and snow than aluminum aircraft. 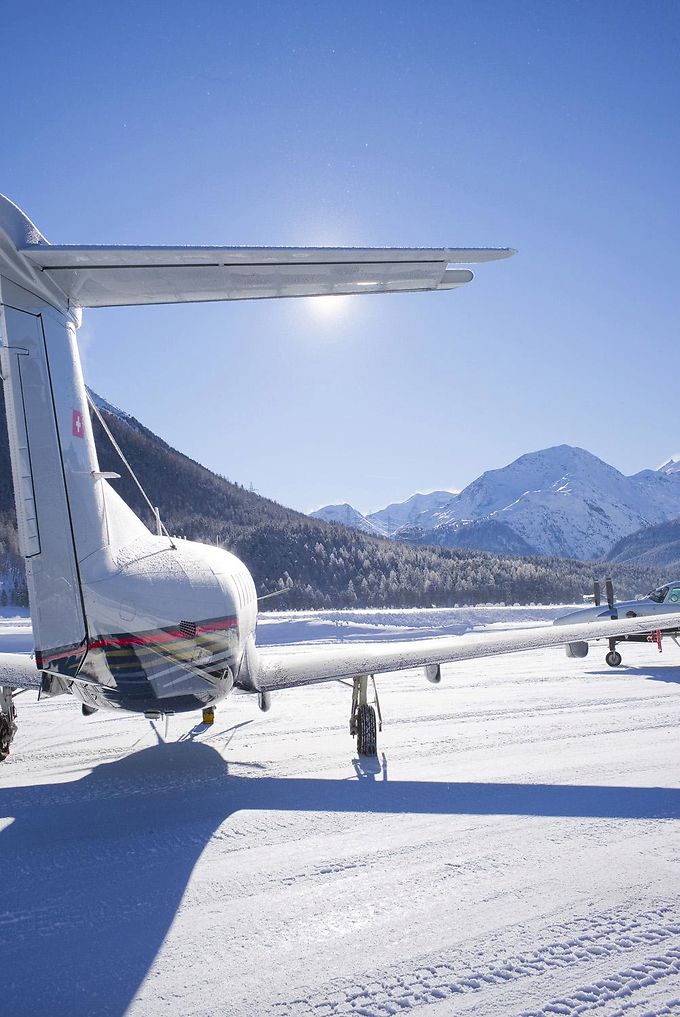 When traveling during the winter months, aircraft de-icing costs are something to take into account for your trip. Depending on your departure and destination airports, the chances of needing de-icing before the flight can vary. When flying to a winter destination in the mountains (to go skiing for example), the chances of your aircraft being de-iced are higher, as the airport tends to be located at a higher altitude and chances of snowfall and icing are greater.

Prices of de-icing can vary greatly depending on the specific airport and type (size) of aircraft, but the general rule is: the larger the aircraft, the more liters of fluids are used, and the higher the overall cost.

To illustrate this, here are a few de-icing cost estimates for different types of aircraft:

(at an estimate €5/liter of fluid)

By comparison, de-icing a larger regional or commercial airliner can cost between €5,000 and €10,000 per flight!

Although the exact will depend on the airport, fluid costs and specific dimensions of your aircraft, these figures can give you a rough estimate of the costs involved. But the general rule of thumb remains: the larger the aircraft surface, the more fluid used, the higher the final cost. 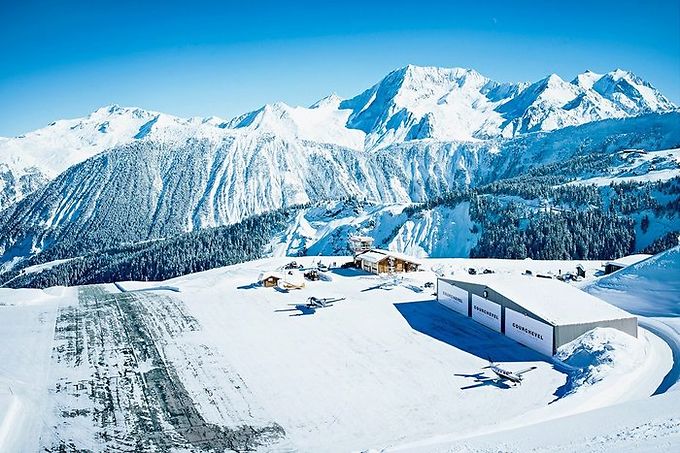 Aircraft de-icing is an important process that helps to ensure the safety of passengers and crew during winter travel. The fluids used for de-icing help to remove snow and ice from the aircraft's surface, so that it can safely take off.

Depending on the type of aircraft, the airport and current weather conditions, prices for de-icing may vary. If you're traveling during the winter months, it's always a good idea to factor in the cost of de-icing when budgeting for your trip.

Luckily, our team of private jet brokers will guide you every step of the way to make sure you can travel comfortably, even in the winter.

For more information or questions about aircraft de-icing or private jet travel during winter, feel free to contact us!